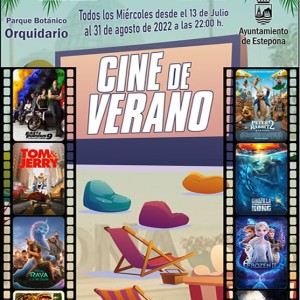 This Wednesday begins the Summer Cinema for all audiences in the Orquidario Park.

The screenings are free and will last until August 31.

The Estepona City Council informs that this Wednesday the first of the screenings of the Summer Cinema begins, which will take place in the Botanical-Orchid Park.

As it did last summer, the City Council is launching this open-air cinema initiative, aimed at all audiences and totally free, which will offer a top-quality film program. The billboard includes eight films to enjoy the best cinema with the family, throughout the summer.

The projections will begin at 10:00 p.m., and will run every Wednesday until August 31, on a 6X4 meter screen:

August 10: "Peter Rabbit 2. On the run." (The screening of this film will be at Plaza José Vázquez, in Cancelada)

This website uses cookies to improve your experience while you navigate through the website. Out of these, the cookies that are categorized as necessary are stored on your browser as they are essential for the working of basic functionalities of the website. We also use third-party cookies that help us analyze and understand how you use this website. These cookies will be stored in your browser only with your consent. You also have the option to opt-out of these cookies. But opting out of some of these cookies may affect your browsing experience.
Necessary Always Enabled
Necessary cookies are absolutely essential for the website to function properly. This category only includes cookies that ensures basic functionalities and security features of the website. These cookies do not store any personal information.
Non-necessary
Any cookies that may not be particularly necessary for the website to function and is used specifically to collect user personal data via analytics, ads, other embedded contents are termed as non-necessary cookies. It is mandatory to procure user consent prior to running these cookies on your website.
SAVE & ACCEPT